Defenit CTF 2020 had a reverse engineering chalenge, Malicious Baby, which was a Windows binary. The goal was to unpack it and get the flag, as the description tells us.

Description: There is a malicious binary packed with a PE Packer I made for you. Your mission is unpacking the malware manually and recognizing the technique it uses. File: MaliciousBaby.exe

Doing a file on the binary:

Not too much information one that one. In IDA, there’s only 4 functions, as we might expect from a packed binary. Looking at the imports, we have LoadLibraryA, GetProcAddress, VirtuaProtect and ExitProcess, which indicates the binary will dynamically resolve other functions. However, by running strings, we can see a bunch of functions that might be imported later.

Some functions lead us to a possible process injection (DLL injection, process hollowing, process Doppelgänging, etc.). Those functions are Process32NextW, Process32FirstW, OpenProcess, CreateToolhelp32Snapshot and so on. Particular functions in this list are GlobalDeleteAtom, GlobalGetAtomNameW, GlobalAddAtomW. One known method of injecting into a remote process is called atom bombing (https://www.enisa.europa.eu/publications/info-notes/atombombing-2013-a-new-code-injection-attack), and that just might be it.

As the binary will want to inject into a remote process, we will watch what process by hooking on Process32NextW, and will hook what’s being injected by hooking QueueUserAPC, all using xdbg.

Process32NextW is used to iterate through all processes running on the system, and QueueUserAPC is defined as follow.

pfnAPC: A pointer to the application-supplied APC function to be called when the specified thread performs an alertable wait operation.

So, we can guess the binary is looking for a process calc.exe. Let’s just open one and rerun the binary. It will then break on QueueUserAPC. By looking at the parameters, we can see one function address, 0x18F948 in our case. We can right-click and select Follow DWORD in Disassembler. It is in the middle of a function. By looking around the function, we can see one with suspicious instructions.

As we can see, it might again resolve dynamically some functions using stack strings. What is interesting is the string being transformed. 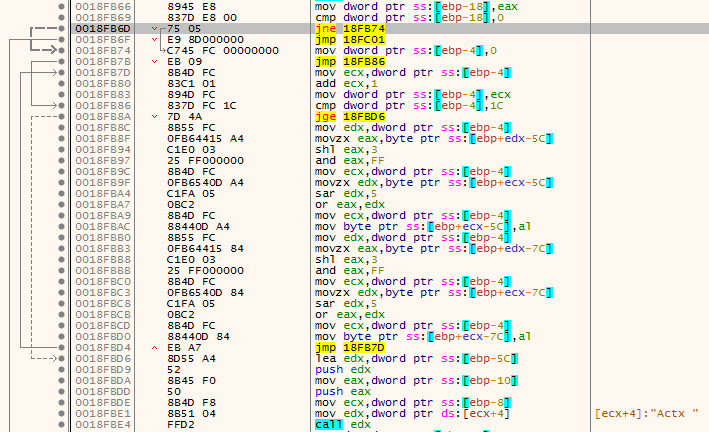 I didn’t feel like reversing it or writing a python script so I just jumped on the beginning of the function (right-click and select Set New Origin Here), let the function push the strings then I jumped onto the beginning of the loop. I put a breakpoint on the mov byte ptr ss:[ebp+ecx-7C],al instruction to see what was there, as the byte being “decrypted” was pushed there. The first character was D and then e. That looked nice, and we got the flag.

As the flag tells us, the process was doing atom bombing, but we didn’t really care since we just hooked on interesting functions. That wasn’t a really hard challenge, but was fun for sure!